A New Start In Sewaren 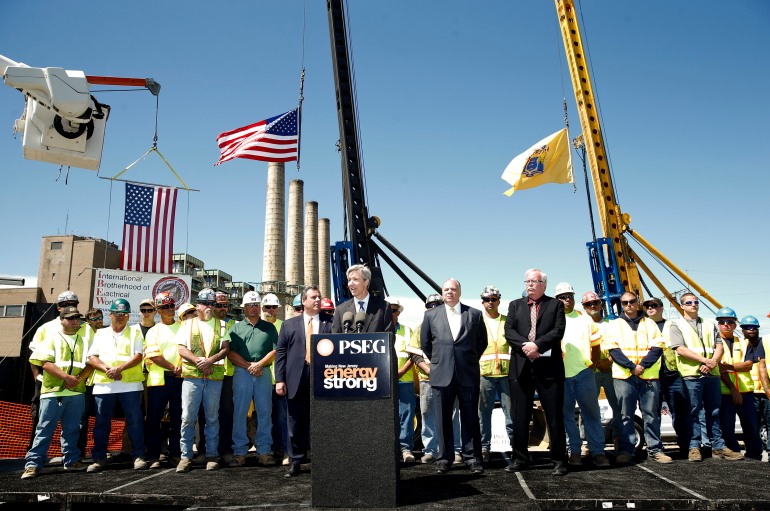 Nearly four years ago, Superstorm Sandy pushed a massive tidal surge into the Arthur Kill, flooding the communities and industrial sites that line its banks. Some of the heaviest damage occurred in Sewaren, where four power plants and a nearby electric switching station were under water, cutting off power to the refineries and other businesses that surround the site.

After the storm, PSEG’s employees worked for days, drying and repairing equipment to get both the power plants and the switching station back online. Refineries, businesses and residential customers remained in the dark for days before crews were finally able to restore power.

Since then, PSEG has invested billions of dollars to repair the historic storm’s damage and fortify New Jersey’s energy grid to be more resilient against extreme weather – including the next Superstorm Sandy.

Christie said infrastructure projects like those in Sewaren are good indicators of how well New Jersey has recovered from Sandy’s storm and flood damage – and what it means for the state’s future.

“Energy reliability is something we learned a significant bit about during Sandy,” Christie said. “New Jersey has to establish a new level of resiliency to natural

disasters, and we’re working with energy companies like PSEG to harden our energy systems and make us less susceptible to storm damage.”

“Together, these upgrades make us better as a state,” Christie continued. “We learned an extraordinary amount 3½ years ago. We’re making ourselves better and stronger, post-Sandy, than we were before.”

In his remarks, Izzo recalled the work performed by PSEG crews to get Sewaren’s power plants and switching station back online after the storm.

“It’s hard to believe it was almost four years ago when almost this entire site was flooded by the storm surge from Superstorm Sandy,” Izzo said. “While I would grade the employees at PSEG an A+ for their restoration work, there’s no question that we all would have been a lot better off if no one had lost power to begin with.”

“It was clear we needed to make our systems more resilient in the wake of severe weather,” Izzo said. ”Together, these projects ensure that we’re ready to weather the next storm.”

The Sewaren 7 Generating Station is a $600 million combined-cycle power plant that will run primarily on natural gas and will generate enough electricity to power half a million New Jersey homes. The high-efficiency plant also will be equipped with best-in-class emissions-control technology.

When it opens in the summer of 2018, the 540MW power plant will replace four existing generating stations on the same site – Sewaren 1-4 – which are to be retired. At almost 70 years old, Sewaren 1-4 are currently the oldest functioning power plants in New Jersey.

The Sewaren Switching Station is the first elevated station to be placed into service as part of PSE&G’s $1.2 billion Energy Strong program, which is designed to bring resiliency to New Jersey’s entire energy grid. PSE&G has spent $125 million to elevate and upgrade the switching station and install new, elevated transmission facilities around the site.

Both new facilities translate into considerable economic impact for both their host community and the entire state.

“We have to look at infrastructure as a way to improve the economy of this state,” Sweeney said, pointing to the Energy Strong program as an example of investment that creates reliability and predictability, which is important to those who do business in New Jersey.

“We need to make these investments to capture the effectiveness of technology and put people to work,” he said. “There are going to be hundreds of people going to work here. That’s a good thing for the economy of this state.”

Over the next two years, construction of the Sewaren 7 Generating Station will create roughly 350 jobs. Once it’s up and running, it will employ as many as 28 permanent, full-time workers.

At its peak, work on the various components of the Sewaren Switch improvements employed 150 workers per day, including laborers, electricians, operating engineers and tradesmen.

The projects will generate $50 million in local taxes over the next 30 years, McCormac said, making PSEG one of the Top 10 taxpayers in Woodbridge.

“We look forward to many, many more years of working together (with PSEG) for the benefit of the residents of Woodbridge,” McCormac said.

Recently, PSE&G was notified by the New Jersey Sports and Exposition Authority that bald eagles had taken up residence in an osprey nest located in the Meadowlands not far from MetLife Stadium. Unfortunately, the...

Spring is just around the corner, and these energy saving tips can help you cut down on heating and cooling while maintaining comfort in your home. Adjust your thermostat: Each degree you adjust the thermostat can save...

Our lives have been transformed by the COVID-19 pandemic even as we all reckon with the impacts of climate change. It has never been clearer: Science matters if we are to fulfill our responsibility to preserve the...